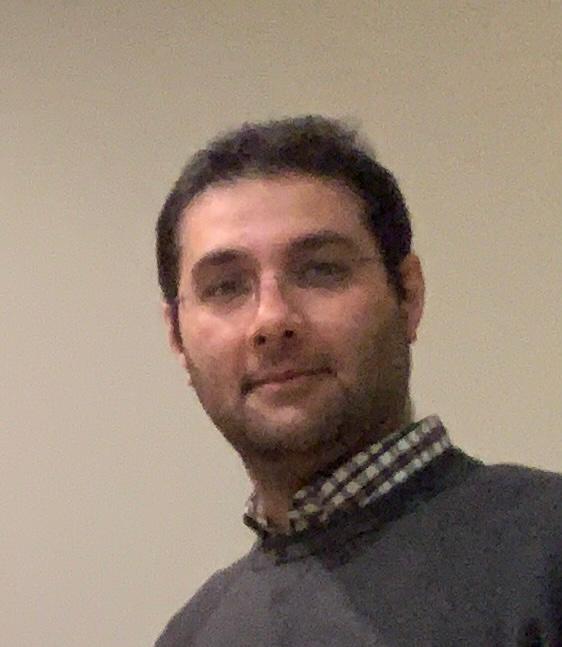 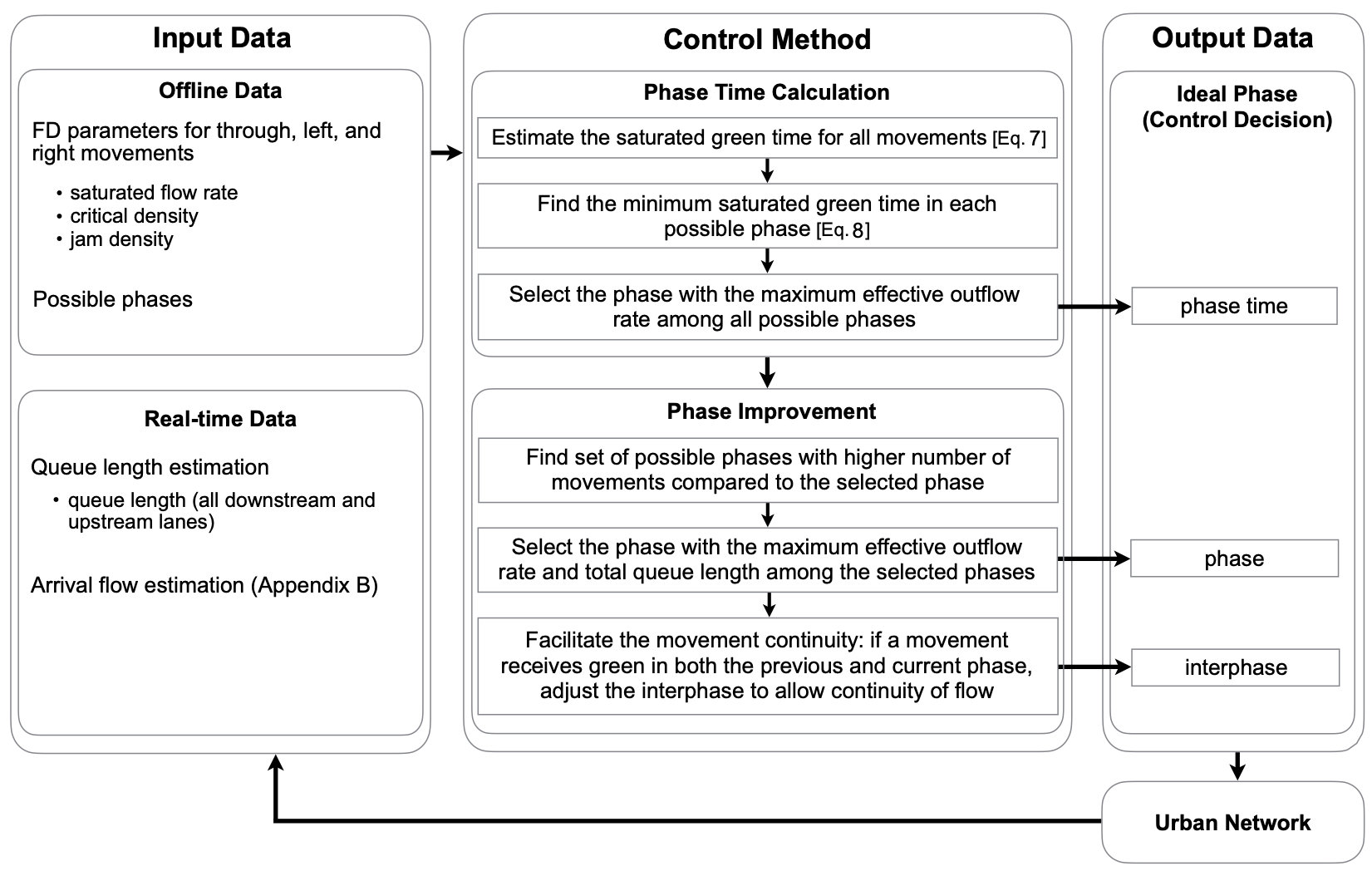 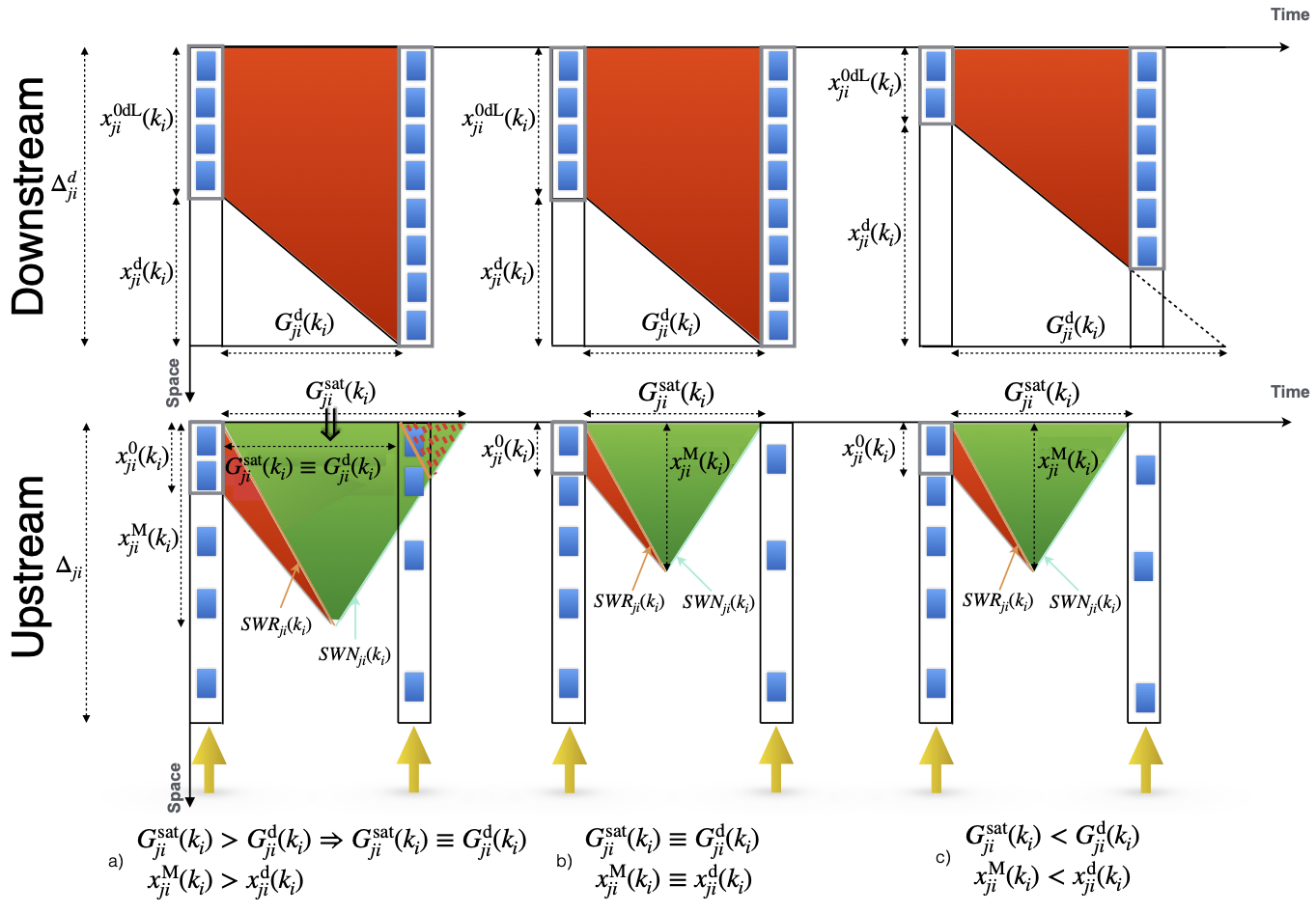 This research proposes a decentralized network-level traffic signal control method addressing the effects of queue spillbacks. The method is traffic-responsive, does not require data communication between intersections’ controllers, uses lane-based queue measurements, and is acyclic. Each traffic controller operating at an intersection aims at maximizing the effective outflow rate locally and independently with the goal of maximizing global throughput of the entire network. At each intersection, the signal control method estimates and adopts the maximum possible phase time in which all active movements discharge at their full capacity. This is modeled using a shockwave based queue length estimation model while capturing the spillback at the downstream links. The method demands real-time data including, the queue lengths, the arrival flows, and the downstream queue lengths in all the lanes at the control decision times. The proposed method results in a feasible solution in all conditions in the entire network with any scale within a short amount of time. A stability concept for the traffic network is defined, and asymptotic stability of the controlled traffic network are verified. Moreover, a sufficient condition for the optimality of the proposed control algorithm for maximizing the instantaneous total throughput of the network intersections is demonstrated. Numerical results show that the proposed method outperforms benchmark methods in both isolated intersection and network configurations. 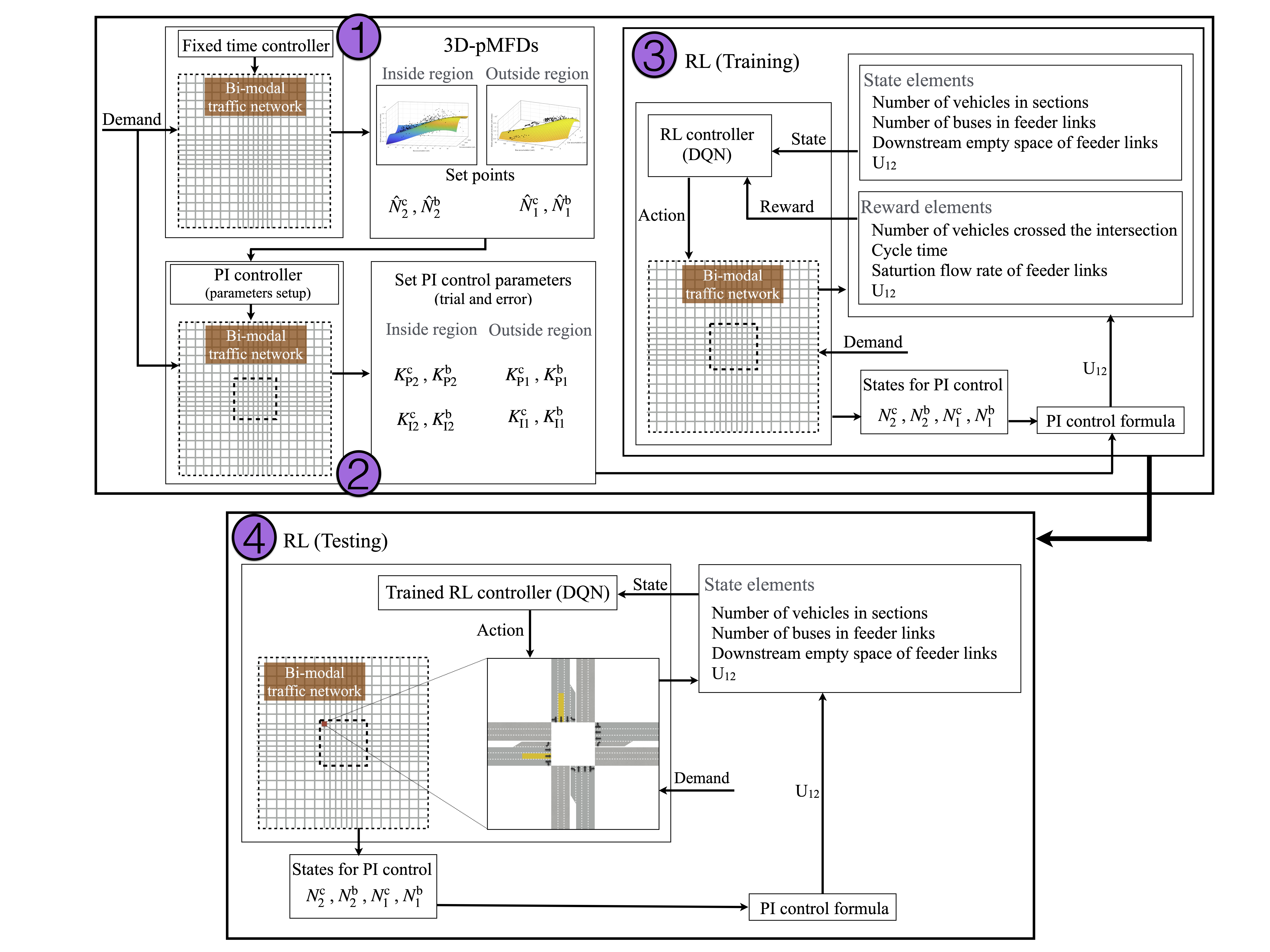 This research proposes a hierarchical perimeter control method in a large-scale urban network consisting of car and public transit modes. We design a hierarchical proportional-integral (PI) control based deep reinforcement learning (deep RL) method to control each intersection on the perimeter independently. The PI control in the high-level of our controller is designed to reduce the state space and at the same time reflect the perimeter control input in the reward function of the deep RL method. The PI control is established on a passenger-based MFD of the network, called 3D-pMFD, which provides the set points, i.e. optimal points, of both inside and outside regions. Using the multivariable PI controller’s parameters based on the obtained set points, a reinforcement learning method is applied in the low-level controller to time each traffic signal on the perimeter without receiving any data from other traffic signals in the network, except vehicles accumulations in the network. The results show a significant improvement of the proposed method compared to the fixed time and PI control methods in terms of total passenger delay. 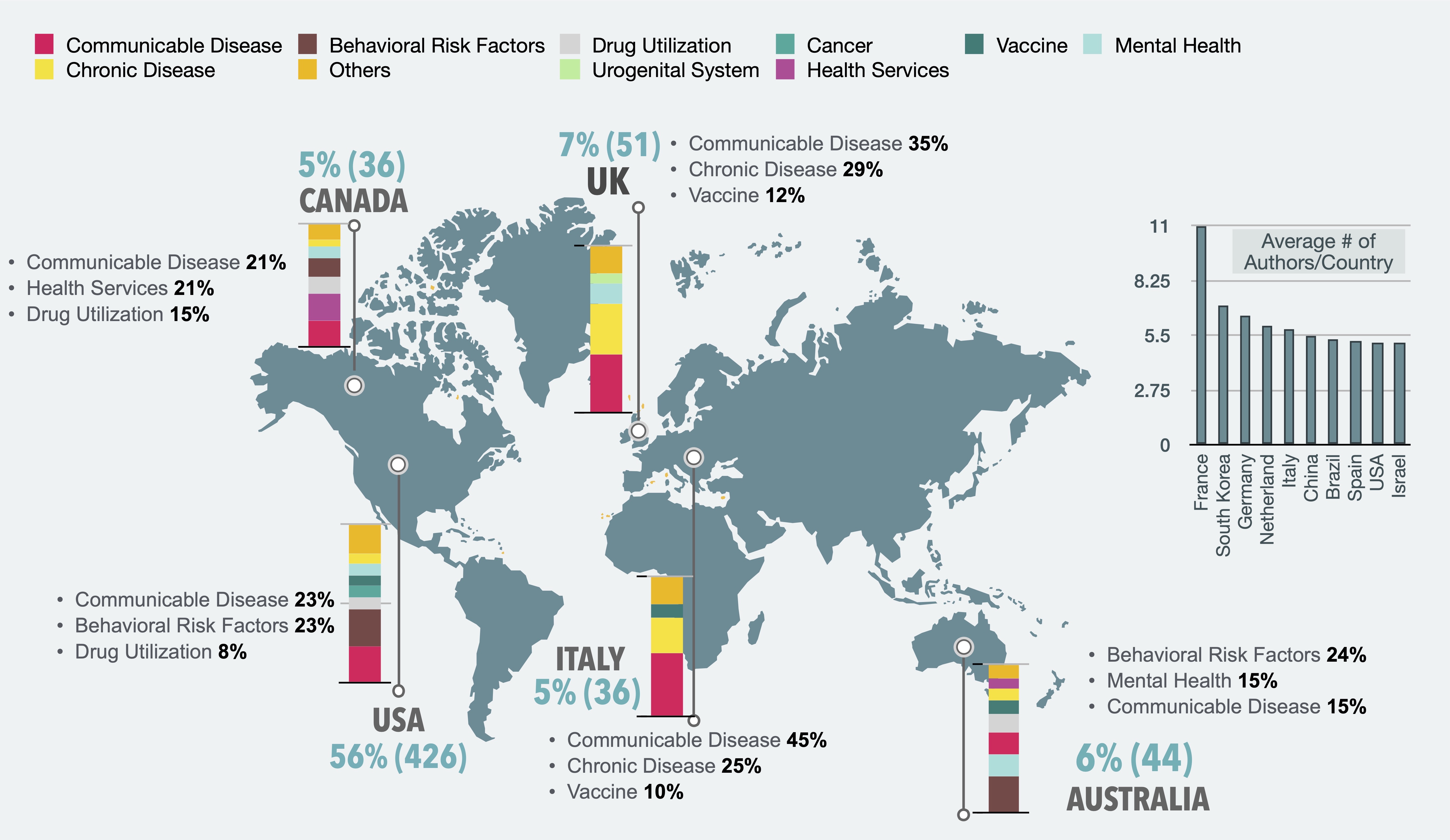 In this research, I utilized natural language processing, qualitative analysis, and visualization techniques to consolidate and characterize the existing research on DPHS and identify areas for further research. In this research, we conducted a comprehensive systematic scoping review of 755 articles on DPHS published from 2005 to January 2020. The studies included in this review were from 54 countries and utilized 26 digital platforms to study 208 sub-categories of 49 categories associated with 16 public health surveillance (PHS) themes. In addition to discussing the potentials of using Internet-based data as an affordable and instantaneous resource for DPHS, this research also highlights the paucity of longitudinal studies and the methodological and inherent practical limitations underpinning the successful implementation of a DPHS system. Little work studied Internet users’ demographics when developing DPHS systems, and 39% (291) of studies did not stratify their results by geographic region. A clear methodology by which the results of DPHS can be linked to public health action has yet to be established, as only six (0.8%) studies deployed their system into a PHS context. I also developed an interactive visual dashboard to provide insights into the findings with a multidimensional and more granular conceptual structure that is difficult to articulate in text alone.

It has long been acknowledged in the context of developing dynamic and reactive systems that users’ input during different stages of the development process helps to quickly and incrementally adapt to changes in the system’s context and users’ needs. Given the data- and communication-intensive nature of developing transportation management systems, utilizing social media data provides a new route for a dynamic collection of needs and experiences in a timely and direct fashion. In this research, we will explore how and to what extent social media data can support urban traffic management systems. To this end, we have conducted a mixed-method study including both manual qualitative analysis, and automatic information extraction using weighted finite-state transducers (WFST), natural language processing (NLP), and deep neural networks (DNN) on Twitter data. We utilize Canadian traffic information from twitter to look for issues and relevant information that may assist authorities and software development teams in making decisions when designing and developing traffic management systems by leveraging lay people’s input. Data triangulation will also be used to help compare our results against other data sources such as Google Trends and scientific material. We found that the self-reported traffic information with lay users on Twitter can be a valuable source to characterize traffic management systems. Moreover, we found that although theory-based publications in the context of traffic management systems can help with traffic estimation, control, and prediction, they are insufficient to characterize the context-sensitive aspects of these systems. 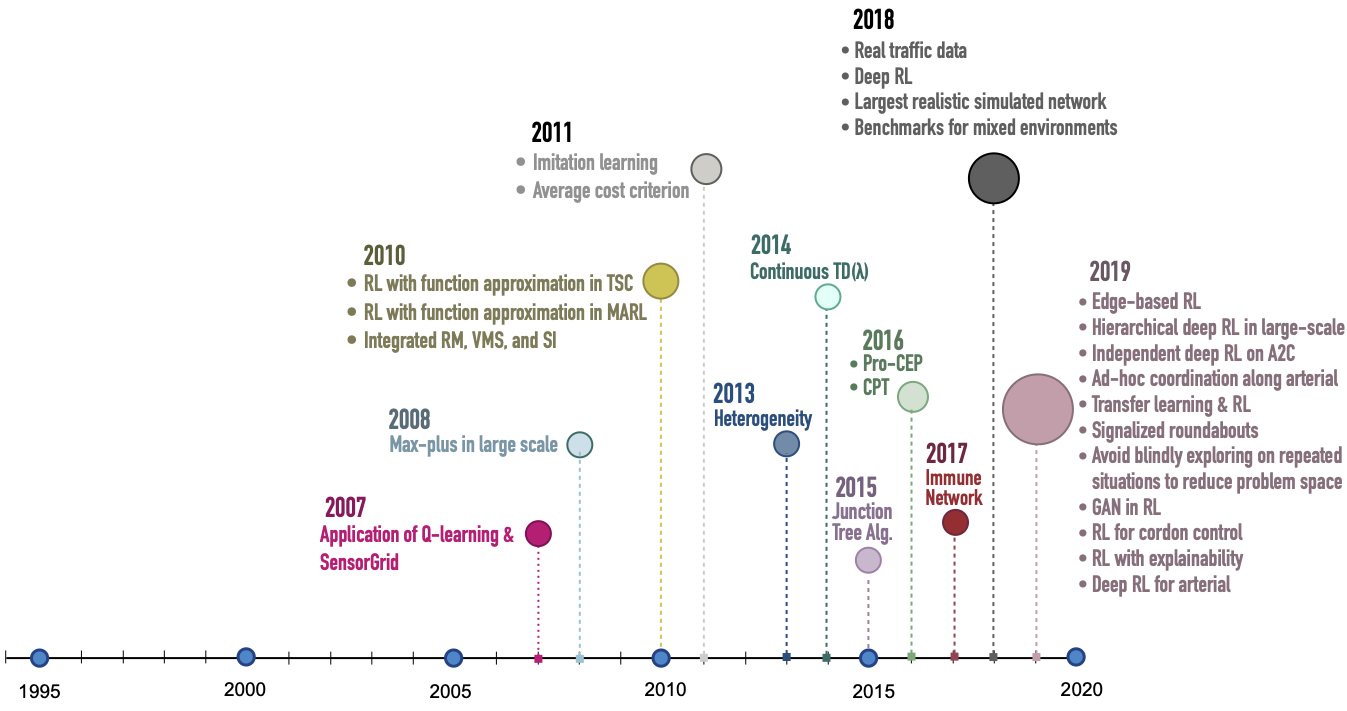 Improvement of traffic signal control (TSC) efficiency has been found to lead to improved urban transportation and enhanced quality of life. Recently, the use of reinforcement learning (RL) in various areas of TSC has gained significant traction; thus, we conducted a systematic literature review as a systematic, comprehensive, and reproducible review to dissect all the existing research that applied RL in the network-level TSC (NTSC) domain. The review only targeted the network-level articles that tested the proposed methods in networks with two or more intersections. This review covers 160 peer-reviewed articles from 30 countries published from 1994 to March 2020. The goal of this study is to provide the research community with statistical and conceptual knowledge, summarize existence evidence, characterize RL applications in NTSC domains, explore all applied methods and major first events in the defined scope, and identify areas for further research based on the explored research problems in current research. We analysed the extracted data from the included articles in the following seven categories: (1) publication and authors’ data, (2) method identification and analysis, (3) environment attributes and traffic simulation, (4) application domains of RL in NTSC, (5) major first events in RL-NTSC and authors’ key statements, (6) code availability, and (7) evaluation. This research provides a comprehensive view of the past 26 years of research on applying RL to NTSC. It reveals the role of advancing deep learning methods in the revival of the research area, the rise of using non-commercial microscopic traffic simulators, a lack of interaction between traffic and transportation engineering practitioners and researchers, and a lack of proposal and creation of testbeds which can likely bring different communities together around common goals.